His Divine Grace A.C. Bhaktivedanta Swami Prabhupada was born as Abhay Charan De on September 1, 1896 to a devout Vaishnava Hindu family in Kolkata. Since early childhood he showed the signs of a pure devotee of the Lord. He used to engage himself in kirtanas and also took part in Krishna conscious plays during schooldays.

As a youth growing up in British-controlled India, Abhay became involved with Mahatma Gandhi’s civil disobedience movement to secure independence for his nation. In 1922, he met a prominent scholar and religious leader, Srila Bhaktisiddhanta Sarasvati. It was not a mere meeting because this proved to be the most influential incidence on Abhay’s future. Srila Bhaktisiddhanta was a leader in the Gaudiya Vaishnava denomination, a monotheistic tradition within the broad Hindu culture. He noticed Abhay’s potential and requested him to spread the teachings of Lord Krishna and the Vedic knowledge to the English-speaking world. In 1933, Abhay became a formally initiated disciple of Srila Bhaktisiddhanta and resolved to carry out his spiritual master’s request. Abhay’s initiation to this mission earned him the title of A.C. Bhaktivedanta Swami Prabhupada. However, across the world he was respectfully addressed as Srila Prabhupada by his followers and disciples. 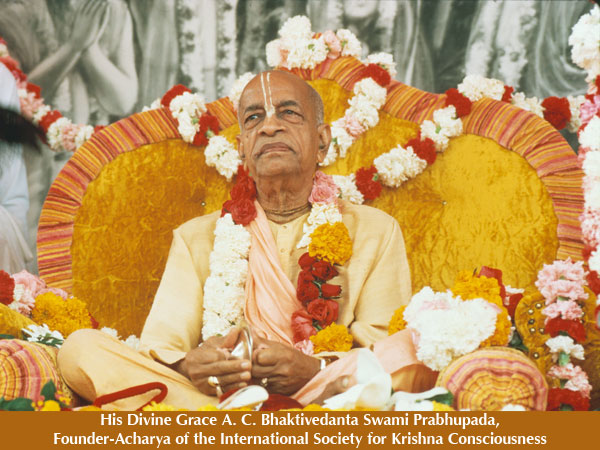 Srila Prabhupada assisted the Gaudiya Math and published some of his own writings, but it was not until 1965, after a lifetime of preparation, that he set out to fulfil the mission his spiritual master had given him. At the age of 69 Srila Prabhupada was offered a free voyage on a commercial steamship bound for New York. His only possessions were Rs. 40 and a trunk with copies of three volumes of the Srimad-Bhagavatam which he had personally translated and published. However, Srila Prabhupada’s main asset was his staunch determination in bringing Vedic culture to the western world and his complete dependence on Krishna. After a year of hardship in New York, his efforts bore fruit. Encouraged by a small group of followers, he established the International Society for Krishna Consciousness in July 1966.

In the 12 years that followed, Srila Prabhupada worked tirelessly to spread Lord Krishna’s message around the world. He circled the globe 14 times opening temples in all the six continents. Men and women from all walks of life came forward to accept his message, and eventually with their help, Srila Prabhupada established ISKCON centres across the world. He opened traditional Vedic schools and initiated 10,000 disciples who helped him in many international projects.

Srila Prabhupada contributed to a revolutionary revival of Vaishnava tradition in India, the homeland of Krishna Consciousness. He opened dozens of temples in India and built grand temples and cultural centres in the holy cities of Vrindavan and Mayapur. He obtained a prime land in Juhu, Mumbai to build ISKCON’s International Headquarters. He prolifically authored over 70 volumes of bhakti literature based on ancient sacred texts of Bhagavad Gita, Srimad Bhagavatam and Caitanya Charitamrita. His writings have been translated into 76 languages. The Bhaktivedanta Book Trust that was established in 1972 to publish his works, has become the world’s largest publisher in the field of Indian religion and philosophy.

In November 1977, while surrounded by his loving disciples in the holy land of Vrindavan, Srila Prabhupada departed from this world and returned to Goloka Vrindavan, the eternal abode of Lord Krishna. On the spiritual plane there is no difference between appearance and disappearance because although the body dies, the soul continues to exist eternally. Therefore, the presence of Srila Prabhupada is still strongly felt by those who follow him.